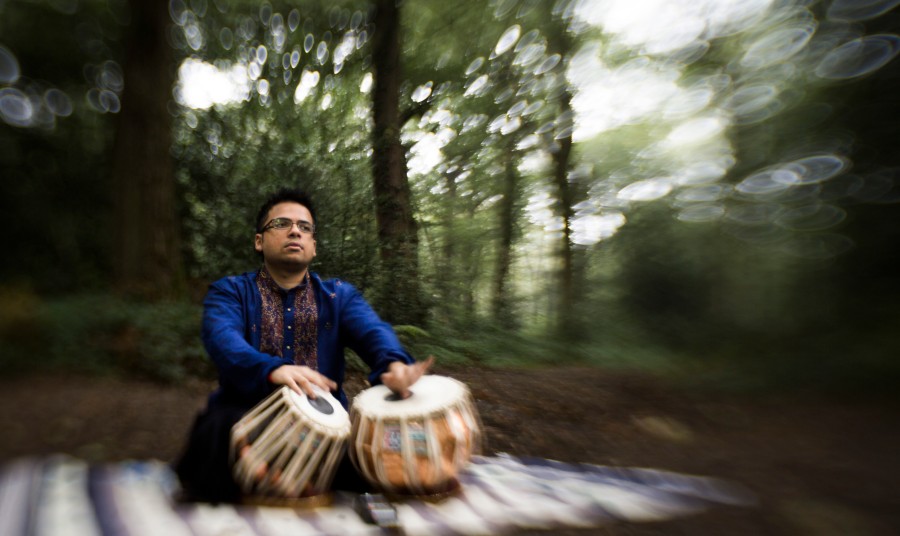 Rishii is a British born musician who brings a fresh, energetic and exciting approach to playing the tabla. He is a ‘rising star’ in the World of Indian Classical music and has been labelled as an ‘Overseas Youth Icon’ by the Eastern Beats Music Society, Assam, India. It is Rishii’s dedication to the art of tabla that has led him to learn from the World’s greatest tabla maestro’s Ustad Zakir Hussain and Pandit Anindo Chatterjee. Rishii has also received guidance from Suphala Patankar, disciple of the late tabla master Ustad Allarakha.

In 2014 Rishii produced his first show ‘Melodies on the Brink’ with support from the Arts Council, England which commemorated the First World War to a sell-out audience at Embrace Arts, Leicester. The success of the show was down to Rishii’s innate gift of bringing artists together and inspiring them to flourish.

Rishii also has a commitment and passion to developing the next generation of tabla players through his YoTabla Academy. He has gained a reputation as an individual with “empowering qualities”. In November 2015 working in collaboration with Leicester kathak dancer Aarti Lodhia they produced ‘Antara’ which was a student showcase of their tabla and dance students. This was the first time that Leicester had seen young Indian classical musicians and dancers come together and perform live.

Rishii is an ambassador for Indian music having lectured and delivered workshops at places such as the Cultural Integration Fellowship in San Francisco, California, Attenborough Arts Centre Leicester, Heartlands Hospital Birmingham and Liverpool World Museum.

Rishii completed a leadership programme with Performing Arts Leicester (PAL) in 2013. Rishii has made a mark in the industry, not only as an exciting artist but also as an arts entrepreneur.

Recent Posts: Methods for misunderstanding the nature of thing

Here are a couple of videos giving a taster of the performance. One is a short explaining the piece and the other is the entire performance.

Images from the performance

ONCE MORE WITH FEELING…

So to bring you up to speed from my last post (https://methodsfor.info/2015/10/15/in-which-i-find-a-voice/), a couple of weeks after the day at Dance4 we had a very focussed couple of days of rehearsals at Curve theatre here in Leicester. Collaborating in this way – as part of a group of artists, performers, producers, curators, a technologist and […]

The surface of the Tabla have been rigged with touch points made of copper tape. Every time Rishii touches one of the points whilst he is playing, it sends a signal to the Bare Conductive touchboard. this signal controls the lights which will be seen by the dancer Yuyu Rau and instruct her movement.  The […]

Taking the tabla player out of his comfort zone.

I will never forget the first time Ashok approached me for his fascinating project, ‘Methods for Misunderstanding’. He said to me: “Rishii are you prepared to be uncomfortable?” I hesitantly replied ‘yes’. In a nutshell, the methods project has made me view my tabla in a new way. I have been trained in Indian Classical […]

As we live through another unfulfilled imagined future day, take a moment to contemplate how you imagine your future to be. Whilst discussing this very matter with Artist and creative technologist Sean Clark, He offered a very interesting insight into how the worlds of Science fiction and real-world constraints of technology and market economics come […]

Interesting insights on translation from this old Rhizome article titled “Artifacts: A Conversation Between Hito Steyerl and Daniel Rourke” In particular it is this line that strikes a chord- “One of the biggest misunderstandings about digital information is that it is replicated identically, without loss or transformation. But anyone who works with such information knows […]

In which I find a voice..

So a very exciting and productive day at rehearsals for Methods today, held at Dance4’s studios at the gorgeous College Street Centre in Nottingham. It was great to see Rishii and Yuyu working with each other, interpreting the various data feeds that drive the production at this stage. The project involves a number of collaborators and contributors […]

Looking at ways of creating prints from some of the swarm images created. I got hold of some hand made khadi paper. read it and weep 640gsm. #IsThisEvenPaper????